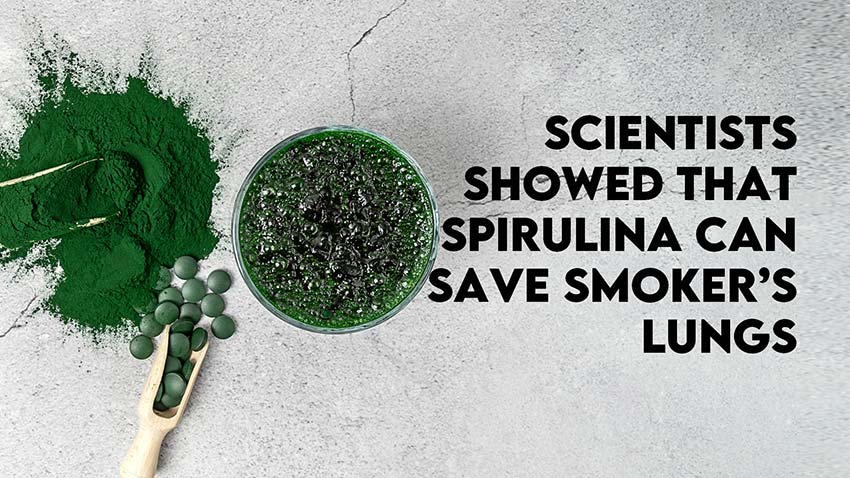 Scientists showed that Spirulina can save smoker’s lungs

Who doesn’t know about the harms of nicotine to the body, and the list is ever-growing. Researchers around the globe are working hard to minimize the adverse effects of nicotine.  Recently a group of scientists from Egypt studied the protective effect of Spirulina platensis nanoparticles on nicotine-induced lung toxicity in mice.

Selenium nanoparticles are well-known bioactive compounds. Spirulina platensis is a widely used blue-green microalga in various industries. Nanotechnology has been exploited as a great scientific area, especially in drug discovery, and the effects of substances on the body.

Spirulina is classified as a “Superfood”. It is truly amazing and full of nutritional wonders as it is rich in protein, carotenoids, omega 3 or omega 6, Gamma-linolenic acid, sulpholipids, glycolipids, potassium, zinc and selenium, vitamin A, vitamin E, and a variety of minerals.

The team through various tests and experiments found that selenium nanoparticles have powerful lung-protective activity against nicotine-induced lung toxicity as it normalizes the levels of agents causing oxidative stress. The researchers also observed a reduction in inflammation, which future increases the significance of their findings.

This research work has recently been published in the Pakistan Journal of Nutrition.

Being tired changes a lot about us – it might make our face puffy; our food cravings soar and our coffee addiction even more apparent. A lack of sleep doesn’t only turn us into physical zombies though, it can change the...